Green Street’s Real Estate Analytics solution provides insightful market research and analytics to help real estate investors make the best possible capital allocation decisions. Among our most popular reports are the annual sector outlooks for each of the five major property sectors published in January. This post points to highlights on the outlook for the apartment, industrial, mall, office and strip center sectors, with commentary from Green Street's lead analysts. In addition to offering a deep-dive into supply and demand dynamics, risks and opportunities, and valuation metrics, these comprehensive reports include Market Snapshots for the top 50 U.S. metros. New this year, Green Street added proprietary submarket grades for 700 submarkets. 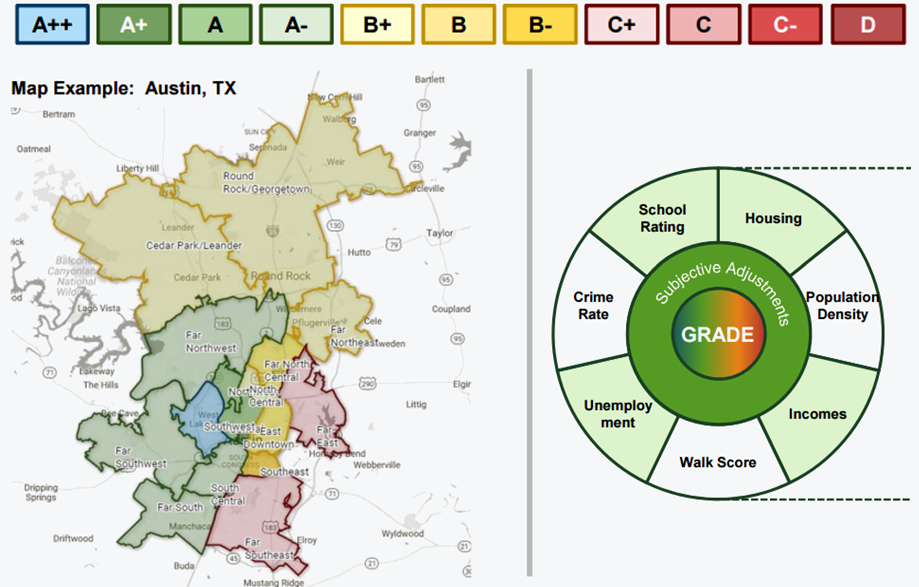 U.S. office fundamentals were slow to recover this cycle vs. other sectors, but steady job growth and modest supply have supported decent growth over the past few years. Momentum slowed in '16, however, and we expect positive but gradually slowing growth in fundamentals through '21. One reason for the sluggish growth is softening in gateway markets. According to senior analyst Jed Reagan, “Office supply pipelines have converged between gateway and non-gateway this cycle.” He continues, “There is enough new development on the docket in Manhattan and D.C. that rent growth should be muted, while key non-gateway markets are experiencing surprisingly manageable supply.” Gateway markets have been clear winners over the past 20 years, but their NOI growth advantage may be less clear-cut in the coming years.

Capital expenditures are the Achilles heel of the office business, which requires the highest level of recurring cap-ex among the major property sectors. Only the hotel business is more cap-ex intensive. Office owners must invest considerable dollars to fund expensive leasing costs (tenant improvements and leasing commissions) and building upkeep (aka, the “maintenance reserve”). “This burden seems underappreciated for office real estate and is one reason why office is priced richly in both the public and private market,” Reagan says. “In past upcycles, leasing costs have diminished as fundamentals have improved but that has not played out this cycle. If anything, leasing costs as a percent of rent appear to be moving higher in key markets like Manhattan, where fundamentals have recently slowed.” Across all real estate sectors, capital expenditures have a large impact on real estate returns and are often not given the weight they deserve.

Densification, or the trend of using less space per employee, has become a more significant impediment to office demand this decade, and should remain a headwind for at least several years. The trend has accelerated "economic obsolescence" for buildings with more traditional, lower-density layouts and put upward pressure on landlords' cap-ex budgets. Millennials are credited with driving these changes. Today's 20-/early 30-somethings represent a demographic bulge and are expected to total roughly half of the global workforce by 2022. “Employers are increasingly positioning their office space as a tool to retain and attract millennials,” Reagan shares. “This crowd favors open seating and collaborative workspace in urban settings where walkable amenities and public transit are accessible.” Millennials’ office preferences may well change over time, as longer-term desires suggest that a shift toward suburban areas is likely as this cohort settles down.

Ecommerce is a disruptor that has proven to have a revolutionary impact on retail, creating strong headwinds as companies work to rationalize their physical store footprints. On the flip side, industrial properties have greatly benefitted from the proliferation of online shopping. Historically high demand has occurred despite uneventful economic growth and slowing of global trade, and these two factors have traditionally served as the primary drivers of industrial demand. “Ecommerce has had a much bigger impact than we and all players in the industrial space anticipated,” says analyst Eric Frankel. He adds, “The shift from 4-day to 2-day shipping or next-day delivery has been a very meaningful factor in the change.” While asset value growth has occurred largely in tech hubs and other coastal markets, large distribution and population hubs like Dallas have posted surprisingly strong growth due to disproportionate ecommerce demand.

When it comes to ecommerce, it’s impossible to ignore Amazon. Leasing activity has been led by this online giant, which now accounts for ~15% of ecommerce sales in the U.S., and a wide variety of other companies have picked up the leasing pace as well. “Amazon’s number one goal is customer loyalty – this means low prices, fast shipping and easy returns,” Frankel comments. “Other traditional brick-and-mortar retailers are forced to chase this level of service just to keep up.” Additionally, many retailers outsource and rely on UPS and FedEx as third party logistics providers/carriers for shipping. Amazon is actively working toward ways to reduce that dependence and those associated costs.

While the new presidential administration has pledged to improve economic growth and invest in national infrastructure, tax reform and tariff threats may result in lower growth rates for trade and consumption and thus reduce warehouse demand. “If retail sales growth slows, that wouldn’t be good for the industrial sector,” Frankel states. “That said, the most likely scenario of additional trade barriers at this time seems to be slightly lower GDP growth and higher inflation.”

Slowing job growth throughout 2016 made it more challenging for new apartment supply to be absorbed, leading to a deceleration in rent growth. “Job growth slowed a bit more in ’16 than we anticipated," says analyst Conor Wagner. He adds, "We saw a particular slowdown in high-wage sectors.” High-wage job growth is crucial for the absorption of new supply, which is focused on the high-end of the market.

Oh yes, about that election

In addition to slowing fundamentals, the increase in interest rates in late ’16/early ’17 and uncertainty over tax reform have likely slowed transaction activity as investors adjust their expectations. Wagner states, “Nothing concrete has happened since the administration change yet, but there seems to be renewed confidence among apartment operators in the overall outlook for economic growth.”

The biggest demographic theme that affects property sectors is the expansion/shrinkage of different age cohorts as boomers and millennials pass through them. The Apartment Outlook also dives into demographic shifts and how these impact the space. “The millennials are in a better position for homeownership than the Gen X cohort, which was burned during the housing bust,” explains Wagner. This expanded the renter pool for all rentals including apartments. Wagner adds, “This doesn’t mean that today’s millennials will be renting at the same rate in ten years.”

Publicly-traded mall REITs control the majority of malls in the U.S. (roughly 80% by asset value). This dynamic stands in stark contrast to other property types, which are fragmented and controlled by private owners. Additionally, mall asset values are not primarily driven by underlying market fundamentals, but by the quality of the center.

High-quality malls have enjoyed the entirety of asset value appreciation in recent years. Values for high-productivity mall owners have more than doubled since the recession - during the same time that ecommerce spending picked up steam. Ecommerce market share gains and anchor obsolescence remain the key risks for malls in the coming years. Apparel, a category that was long thought to be immune to ecommerce, has been one of the fastest growing online businesses over the past few years and the pace of growth is expected to continue. According to managing director DJ Busch, “Better quality malls are adapting and introducing 'internet resistant' concepts such as restaurants, entertainment and services.” He continues, “Mall landlords have been working diligently to diversify merchandise mixes and reduce exposure to the apparel category.” Non-traditional mall tenants are opening across the quality spectrum.

Lower productivity malls are still clawing back to pre-recession peak levels. Between ecommerce headwinds, a secular decline of department stores and limited financing avenues, lower productivity centers face increasing headwinds and may struggle to compete longer term. There are over 300 malls in the U.S. that are considered 'C' quality, which are the most at risk to close over the next several years. Busch comments, “Fortunately, these malls only account for roughly 5% of mall value in the U.S. and most won't be missed.”

Most mall retail products come from overseas, and consequently taxes on imports are a negative for mall landlords. Proposed plans of a destination-based tax system – where domestic retailers are taxed on imported goods – would materially impact margins and could potentially pressure retailers’ ability to pay rents. In a scenario where a border tax adjustment becomes a reality, there could likely be several reactionary factors that would offset the import taxes. That said, “It’s hard to see how this would not be a meaningful negative for mall owners,” Busch states. “Luckily, right now the odds seem low.”

Strip center tenant demand is outpacing historically low new supply and operating fundamentals are expected to remain positive for some time. The biggest risk to the current forecast continues to be an unforeseen increase in tenant bankruptcies and store rationalizations. Compared to malls, managing director DJ Busch explains, “Ecommerce is a headwind, but strip centers – particularly grocery-anchored centers - are more immune than other retail property types.” Not surprisingly, ecommerce will impact low-to-average quality centers most, however higher quality centers should be fine.

Retail is a Darwinian business that is constantly evolving. “Tenant bankruptcies are not unusual and failing tenants are often replaced by newer, vibrant retail concepts,” Busch says. “The question this cycle is whether there are enough new concepts.” Big box tenants have seen better days, and the demand pool to backfill these larger spaces seems pretty shallow. Several noteworthy strip center anchors announced material store closures - space that will need to be re-leased in '17. With mall landlords also eyeing strip center tenants to backfill vacant boxes, will there be enough to go around?

Grocery-anchored properties have historically traded at lower cap rates than power centers of similar quality due to the theory that centers with grocers are more defensive in nature (i.e., recession resistant, less ecommerce risk) and have more rent-growth potential with small shops. Grocers are critical anchor tenants because they are the primary necessity-based retailer that drives frequent and consistent traffic into a shopping center. Unlike most other retail categories, grocery has not yet gained widespread acceptance in an online shopping format (Egrocery market share is only 2% today). However, the tide may be changing. Busch says, “It seems unlikely that Egrocery will markedly disrupt the grocery business in the near term, but the magnitude of the risk five years hence becomes more real as Amazon, venture capitalists, and other ‘disruptors’ find ways to reinvent old ways of doing business.”

Learn more about our insights

This Non-Core Property Sector “Towers” Above Others

How Inflation Is Impacting Commercial Real Estate: By the Numbers